Check out the Omaha World Herald’s article a couple of weeks ago about our former intern and Creighton University grad Timi!

With his time in Omaha ticking away, new Creighton University graduate Timi Onafowokan set himself a challenge that he hoped would get him in shape, shake the post-graduation blues and remember the city he’d come to love.

He decided to run for 60 minutes at 6 a.m. every day for 60 days straight. He set a course from his house in midtown Omaha to the beak of the bronze Billy the Bluejay statue outside Creighton’s downtown soccer stadium, then back home again by a circuitous route through the Gifford Park and Cathedral neighborhoods

It wasn’t easy. Onafowokan developed a love-hate relationship with the California Street hill that climbs from the Creighton campus up to Duchesne Academy. He found out how cold his hands could get (colder than bronze Billy). He pushed though headaches, fevers, ice, snow and aching Achilles tendons.

Onafowokan came to Omaha from Nigeria by way of England. He had attended Catholic school while growing up in Lagos. He started college in England, playing goalkeeper for the school soccer team as he had as a lad in Nigeria, then decided to continue his schooling in the United States. 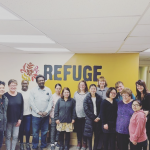